Several years ago, Georgia Institute of Technology researchers created a technology-enhanced glove that can teach beginners how to play piano melodies in 45 minutes. Now they’ve advanced the same wearable computing technology to help people learn how to read and write Braille. The twist is that people wearing the glove don’t have to pay attention. They learn while doing something else.

“The process is based on passive haptic learning (PHL),” said Thad Starner, a Georgia Tech professor and wearable computer pioneer. “We’ve learned that people can acquire motor skills through vibrations without devoting active attention to their hands.” 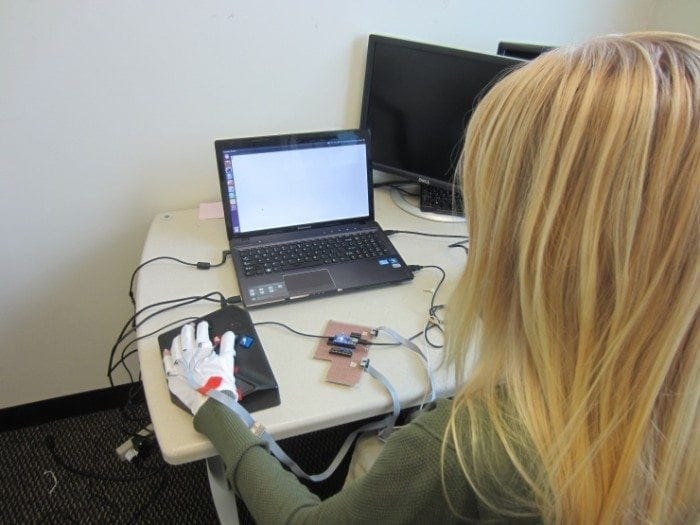 A wearable computing technology helps people learn how to read and write Braille as they concentrate on other tasks.

In their new study, Starner and graduate student Caitlyn Seim examined how well these gloves work to teach Braille. Each study participant wore a pair of gloves with tiny vibrating motors stitched into the knuckles. The motors vibrated in a sequence that corresponded with the typing pattern of a pre-determined phrase in Braille. Audio cues let the users know the Braille letters produced by typing that sequence. Afterwards, everyone tried to type the phrase one time, without the cues or vibrations, on a keyboard.

The sequences were then repeated during a distraction task. Participants played a game for 30 min and were told to ignore the gloves. Half of the participants felt repeated vibrations and heard the cues; the others only heard the audio cues. When the game was over, participants tried to type the phrase without wearing the gloves.

“Those in the control group did about the same on their second attempt (as they did in their pre-study baseline test),” said Starner. “But participants who felt the vibrations during the game were a third more accurate. Some were even perfect.”

The researchers expected to see a wide disparity between the two groups based on their successful results while using the piano glove. But they were surprised the passive learners picked up an additional skill.

“Remarkably, we found that people could transfer knowledge learned from typing Braille to reading Braille,” said Seim. “After the typing test, passive learners were able to read and recognize more than 70% of the phrase’s letters.”

No one in the study had previously typed on a Braille keyboard or knew the language. The study also didn’t include screens or visual feedback, so participants never saw what they typed. They had no indication of their accuracy throughout the study.

“The only learning they received was guided by the haptic interface,” said Seim. 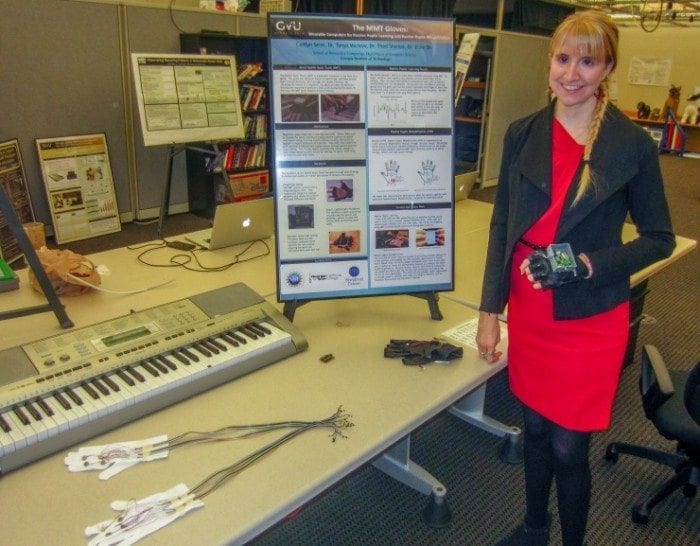 Seim is currently in the middle of a second study that uses PHL to teach the full Braille alphabet during four sessions. Of the eight participants so far, 75% of those receiving PHL reached perfect typing performance. None of the control group had zero typing errors. PHL participants have also been able to recognize and read more than 90% of all the letters in the alphabet after only four hours.

Nearly 40 million people worldwide are blind. However, because Braille instruction is widely neglected in schools, only 10% of those who are blind learn the language. Braille is also difficult to learn later in life, when diabetics, wounded veterans or older people are prone to lose their sight.

The Braille studies will be presented in Seattle this September at the 18th International Symposium on Wearable Computers (ISWC).