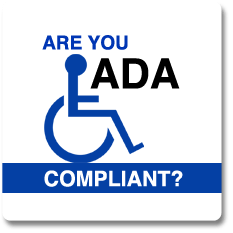 ADA Compliance in the Workplace

Here are some great informational resources on how to be compliant with The Americans with Disabilities Act (ADA), The Individuals with Disabilities Education Act (IDEA), Section 504 and Section 508 of the Rehabilitation Act of 1973. There are an estimated 800,000 visually impaired persons currently using the web. It’s projected there are 6.5 million Americans age 55 or older that experience severe vision loss; by 2030 this number is expected to double. With numbers that high you can easily understand why ADA compliance in the workplace is so important. Use the links below to explore more details about these important laws and regulations.

Bars discrimination on the basis of disability in federal programs, including removing communication barriers by providing “auxiliary aids” that allow persons with disabilities an equal opportunity to participate.

“No otherwise qualified handicapped individual… shall, solely by the reason of his handicap, be excluded from the participation in, be denied the benefits of, or be subjected to discrimination under any program or activity receiving federal financial assistance.”

Section 508 also requires that individuals with disabilities, who are members of the public seeking information or services from a Federal department or agency, have access to and use of information and data that is comparable to that provided to the public without disabilities.