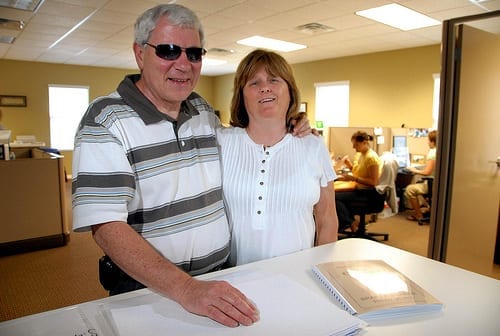 The concept of Braille Works happened at a restaurant in Cleveland. They handed me a Braille menu and we both became excited. We thought, “why not start a company that does this – producing accessible documents?” So, in the fall of 1993, I did research and learned how to get the necessary tools to produce Braille for a number of documents.

A team of two

I was a sales manager for a business forms company and worked directly under the owner. I learned a lot about business and sales there. Joyce had a secretarial service that handled overflow work for small companies. Joyce is sighted and is a hard working person, especially on the keyboard, and has a sound business mind. I knew how to write Braille and read it for myself, but, didn’t know anything about production, software or equipment. 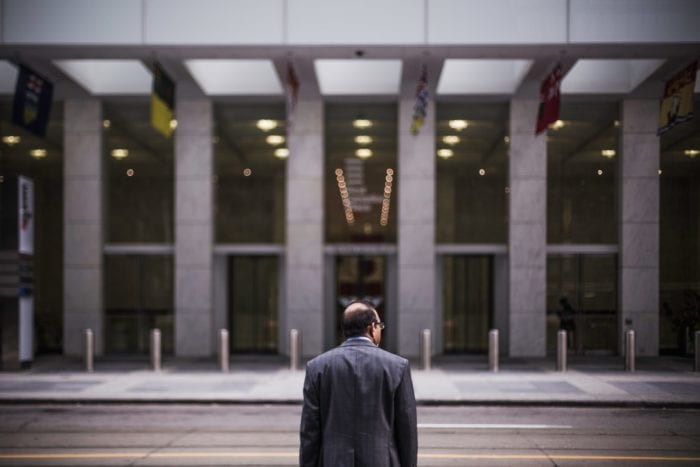 We did it without the banks

The challenge was that the equipment and software were all very expensive and we did not have much money. I went to the Small Business Administration and several banks. Guess what – when banks heard “you want to start a Braille company” – this part was never said out loud, “you are nuts!”, but we felt it. We started dipping into savings and Joyce took a full-time job so I could stay home and make sales calls. Back then I would go to the library and photocopy pages out of a business directory. In the evening, when Joyce came home from work, she would read names of restaurant chains on cassette tape so I could spend the next several days calling headquarters and trying to get the chance to produce Braille menus. This was not something they were interested in during the ’90s and it took much convincing to get restaurants to move forward.

It’s all about connections

To think, this all started in our home in Cleveland and we have been very blessed.

“Mike came to me and said, “I will get you in touch with someone at this phone company. Guaranteed you’ll get the business.” He got us connected, and December of ’93, we’re upstairs on the 24th floor of this building signing these agreements and these deadlines. (snaps fingers three times to signal the quick deal with the audible cue of “ba, ba, ba”) We leave, we get in the elevator, I pick Joyce up, and I’m running around the elevator screaming, hollering and just all excited, and she says “We don’t have any equipment. We don’t have the software.” I say “You know the whole time we were signing that stuff I kept thinking about that.” So, to get the first actual job done, I had to find a guy that worked at another company that had a braille embosser. I gave him 20 bucks, and I was coming in after hours to print out this one document while we were waiting for our equipment to arrive.”

In January of 1994, Joyce, my wife, and I delivered the first project to a phone company in Ohio. These were a phone service’s TTY instructional books for hearing impaired people.

Up to this point, we were only producing Braille. But in 1995, we added large print. So now we could produce Braille and large print menus as well as other documents.

“The production area was in our basement. The office was upstairs in our dining room. And (my sons) Kenny and Brian had bedrooms down the basement, so I couldn’t put any more stuff down there. So, we bought a copier. The size of that one (points to a large Kyocera copier in the marketing department) but very used. It didn’t have that fancy (bypass) tray at the end. We put it in our family room in our house. And so I put out an email to our twelve customers, or whatever we had, “Braille Works is proud to announce we’re now doing large print in-house.” And it was true; we were really doing large print in the house.”

We moved the company to Tampa in the fall of 1996 and again worked out of our home. It was just Joyce and me running BW at that time so it was easy to move the business. We hated to leave Cleveland, but we have not yet had to shovel snow in Tampa!

“And then why did we add audio? In 97 things were falling apart fast. Things were happening. I was making new kinds of sales calls. NCIL wanted a one-stop shop for braille, large print, and audio, and we had committed that we weren’t going to do audio. So this guy calls me and says “Look, we really want to use you, but we’ve got to have audio.” So I say, “Let me call you back.” I got off the phone and found out I could buy a tape duplicator and multiple duplicators for cassette tapes for about $900 or 1,000 bucks. I found a source for cassette tapes, bought a Marantz high-quality cassette recorder, and had about a ten-minute conversation with Joyce. Within an hour, I was calling the guy back to say that we got audio… and we closed the deal.”

We added audio documents in 1997 and that was the year we almost went under. The jobs were coming in but it was getting harder to order supplies, pay for shipping and waiting 30 days for a client to pay. We had to keep using credit cards and it was becoming increasingly difficult to pay them off. But once again, we were blessed by gaining a couple of new accounts and became disciplined in paying off the credit cards. Five years later, in 2001, we were blessed and paid off the last credit card. 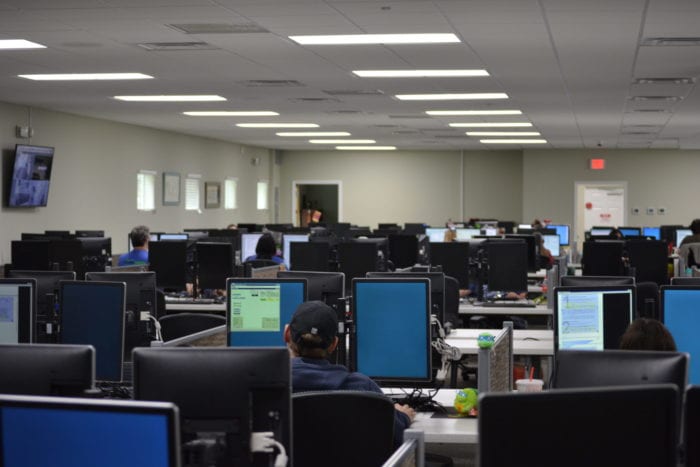 From Discipline to the Fast Track

We started to hire a person or two and had to move into a different house with a small building behind us. We worked out of that small building from 2001 to 2007. In 2007 we built a 3,500 square foot commercial building and have grown since then. Currently, Braille Works has four buildings and approximately 30,000 SF in total. We again are very blessed to have 170 employees today – a far cry from our basement in Cleveland Ohio with just the two of us.

Braille Works now produces statements for government agencies, banks, insurance companies, and many others. We still do Braille and large print menus, along with the addition of audio and accessible PDF documents.

I have saved the best part of our success for last. We give the Lord Jesus Christ all the glory and credit for Braille Works. He has guided us through it all. I know to some that statement may sound ridiculous, but not to us. We thank all of you who are clients of ours and for our wonderful staff. We truly could not do it without you.