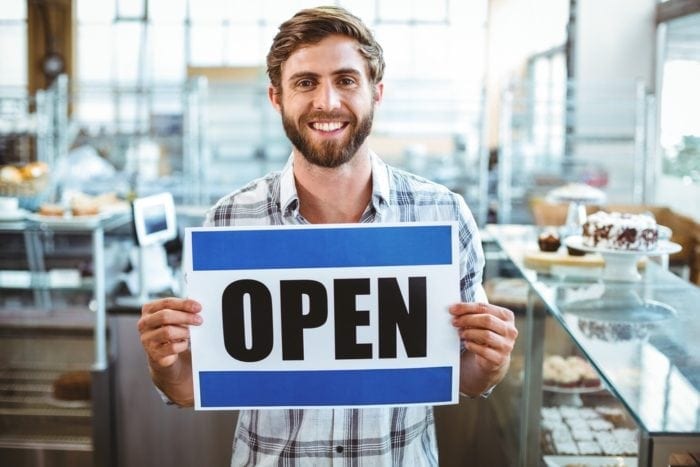 As a business owner, all anticipation builds for the launch—the day that the “doors open”. In fact, this anticipation is the same whether a brick and mortar or an online presence. On that day, people pour into the establishment and all skills, team building, technology and preparation is tested.

Now a person with disability exits their car and makes their way to the business. What do you do? Is this the time to panic and see if the team knows what to do? Not really. You open the door for the customer. Think of accessibility as walking over and opening the door to anyone who comes forward. This act says we’re open to doing whatever it takes to serve the individual. Since we care and people matter. That’s what the Americans Disability Act does. The ADA makes sure businesses know what measures they must meet and what people with disabilities can expect from service.

If affordable, having a staff member who is in charge of maintaining accessible documents and procedures is a valuable resource for your company. However, we recommend having everyone take turns holding the door. This way accessibility becomes a customer service initiative that all are prepared to meet. Educating all teams promotes ideas of accessibility into the work culture. Encourage and empower staff members that take initiative and look for better ways to identify needs. The weekly staff meetings should also include examining measures and feedback from the disabled community.

Life before the Americans Disabilities Act

In 1990, President George H. W. Bush signed the Americans with Disabilities Act into law . When asked about his support of the Americans Disability Act, President Bush said, “Well I supported the ADA because I think it was the fair and right thing to do. I think there are a lot of people who if given access to the workplace, for example, can achieve things. But if they are denied that, they won’t have a shot at the American dream. And it seemed to me that legislation was needed that provided as much fairness, as much access, as possible. And the bottom line was I felt that a lot of people with disabilities could be wonderfully productive citizens, if some of the laws were changed.” 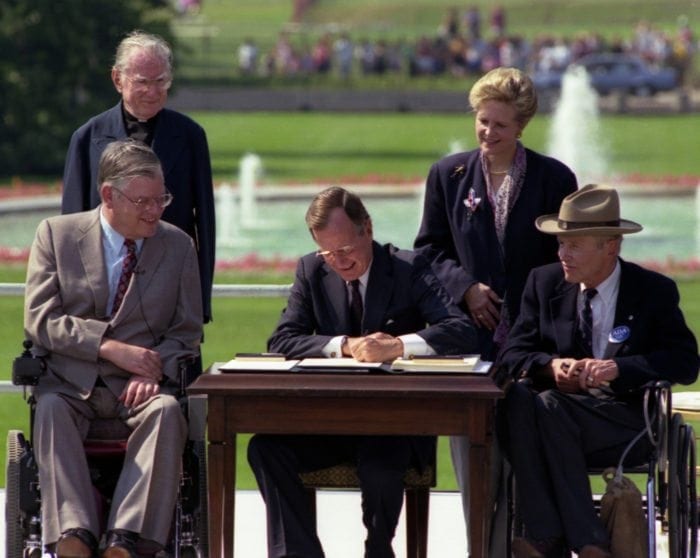 Prior to the ADA, if someone used a wheelchair, that person called ahead to check if the areas they were going had restrooms, ramps, and aisles wide enough to access. The impact of the ADA is evident when seeing individuals using wheelchairs, accessible e-readers, sign language interpreters, Braille signs, closed captioning and so much more. Instead of calling ahead and worrying if one can get around and exercise independence, the ADA eases the concerns of Americans with disabilities. The ADA has been the greatest advocate for disabilities, thus far.

It’s important to note that the ADA achieves its promise when businesses commit to including all people. Commitments include giving equal opportunity to all applications (some may need accommodations), as well as an inclusive and engaging experience. Tell other business owners about your commitment to ADA compliance. Consumers look for companies who are socially responsible, value accessibility and care for customers. If the fellow business owner makes the same commitment, then they increase their reach. For more information on ADA and the benefits of business, see How ADA Compliance can Benefit Businesses and Boost the Bottom Line.

Thanks for holding the door! As we celebrate 27 years of the ADA, we see the significance of this law. It’s removed many barriers for the 57 million Americans trying to lead independent lives. This anniversary was special for us and we contributed to social media awareness with the hashtag #BecauseOfTheADA. 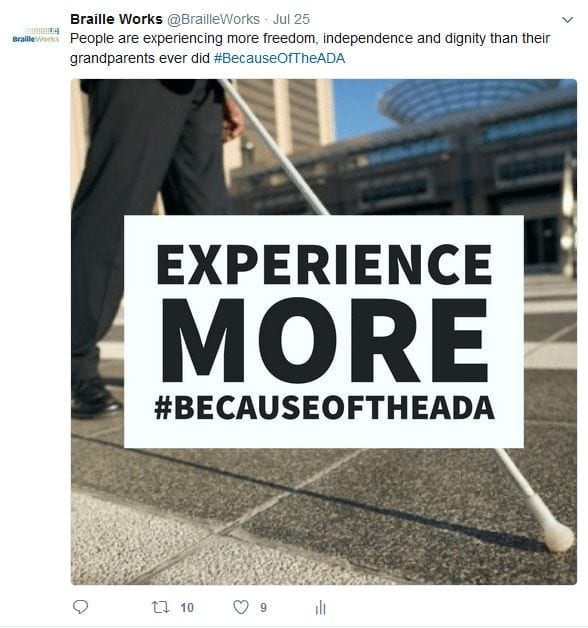 People are experiencing more freedom, independence and dignity that their grandparents ever did. 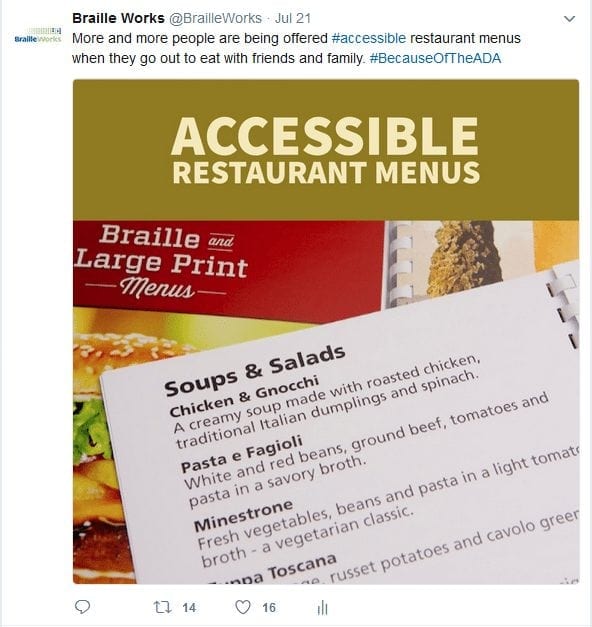 More and more people are being offered accessible restaurant menus when they go out to eat with friends and family. 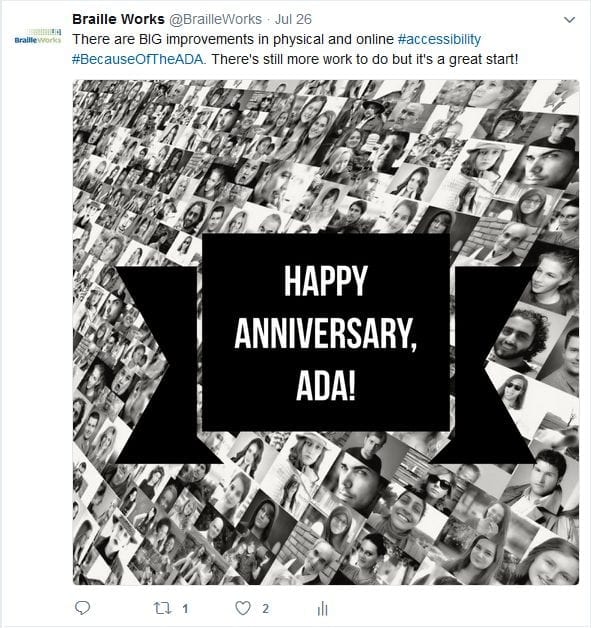 There are big improvements in physical and online accessibility because of the ADA! 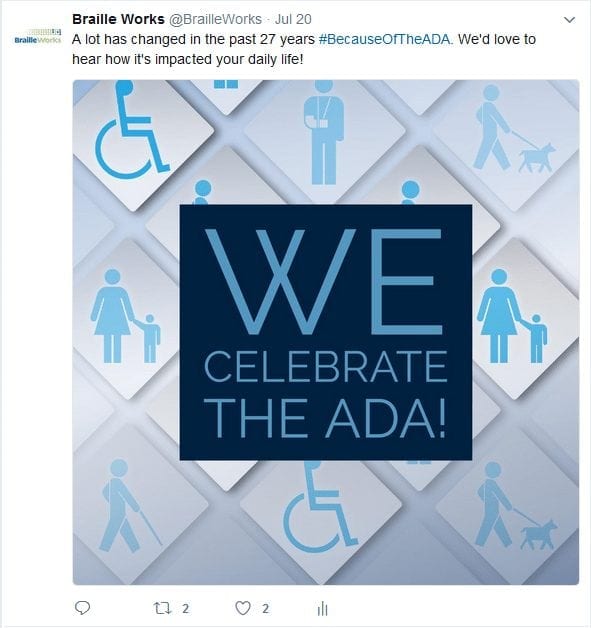 A lot has changed in the past 27 years because of the ADA. We’d love to hear how its impacted your daily life.

People with disabilities are still fighting for more and equal access but thanks to the ADA and its advocates, we have more independence than ever.